Zoom in or out

Welcome to my blog,

Here you can find pictures and news of among others births, christenings, engagements, weddings and holidays.

Please have fun and come back soon.

Princess Marie of Denmark gives an interview to Jyllands Posten

HRH Princess Marie of Denmark, Countess of Monpezat, has given an interview to Jyllands Posten. New pictures accompanied the interview. Those pictures can be found HERE.

There was also a small photoshoot to celebrate the Princess becoming the new patron of Folkekirkens Nødhjælp. Pictures can be found HERE.
Posted by Josette at 3:46 PM No comments:

A new picture of the Royal family accompanied the wishes. Click HERE to view the wishes and the picture.
Posted by Josette at 3:43 PM No comments:

A picture of HM Queen Beatrix of the Netherlands giving her 2011 Christmas speech has been released by the RVD.

Source: RVD via koninklijkhuis.nl
Posted by Josette at 9:22 PM No comments:

HRH The Duke of Edinburgh, The Prince Philip of the United Kingdom of Great-Britain and Northern Ireland, née Prince of Greece and Denmark, has been taken to the Papworth Hospital in Cambridge after suffering chest pains.

There is a new official picture of HRH Prince Daniel of Sweden, Duke of Västergötland, at the official website of the Swedish Royal House.

Click HERE to view the picture.
Posted by Josette at 11:52 AM No comments:

Pictures of the party, including the first public pictures of little Count Léopold, can be found HERE.

A picture of the couples can be found at Tageblatt.lu HERE.

In addition to the 2 grooms-to-be Archduke Carl Christian and Archduchess Marie-Astrid are also parents to 2 daughters and 1 son.

A boy for Princess Julia Katharina of Anhalt and Marc Bernath

HH Princess Julia Katharina of Anhalt and her husband Marc Bernath have a son, who was most likely born in 2011.

The sister of the Princess, HH Princess Julia Eilika of Anhalt, has a son with her partner.
Posted by Josette at 11:01 AM No comments:

Princess Tatjana of Liechtenstein gives birth to a boy

HSH Princess Tatjana of Liechtenstein and Philipp von Lattorff had their 7th child and 2nd son on 17 december 2011. The newborn was named Maximilian.

The Princess is the only daughter of HSH  Fürst Hans-Adam II and his wife, HSH Fürstin Marie, née Countess Kinsky of Wchinitz and Tettau. In addition to Princes Tatjana, the Fürst and Fürstin have 3 sons. 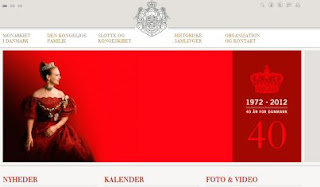 The new website might take a little getting used to with the new design, but once your adjusted, you will be pleased. The main page (in Danish) is devided in "News", "Calendar” and "Photo and video". In addition, there are 5 options at the top of the page, "The monarchy in Denmark", "The Royal family", "Castles and the Royal Yacht", "Historical collections" and "Organization and contact".

The pictures at the website are now larger, of better quality and easier to find. For those interested in behind the scenes work, the part about the organisation of the Royal House has improved significantly. And there are many more new items to investigate.


www.kongehuset.dk
Posted by Josette at 1:45 PM No comments:

HRH the Duchess of Lugo, Infanta Elena of Spain, and her children, HE Don Froilán and HE Doña Victoria de Marichalar.

HRH the Duchess and HE the Duke of Palma de Majorca, Infanta Christina of Spain and Iñaki Urdangarín, and their children, HE Don Juan, HE Don Pablo, HE Don Miguel and HE Doña Irene Urdangarín.

TRH the Prince and Princess of Asturias, Prince Felipe and Doña Letizia of Spain, and their daughters, HRH Infanta Leonor and HRH Infanta Sofía of Spain.

The Princely Court of monaco announced the creation of the Princess Charlene Foundation on December 9, 2011. HSH The Princess of Monaco will present her foundation in 2012. The foundation will focus on children and women in need.
Posted by Josette at 3:11 PM No comments:

New pictures of the Crown Princely family of Belgium

View the pictures at the official website of the Belgian Royal family HERE.
Posted by Josette at 1:42 PM No comments:

View pictures and a video at the official website of the Norwegian Royal family HERE.

Earlier, 2 December, the King and Queen and the Crown Prince and Crown Princess received the artists.

The Crown Prince and Crown Princess invited the artists to have dinner with them at Skaugum on 15 december.

Source: Hans Fredrik Asbjørnsen via kongehuset.no
Posted by Josette at 1:40 PM No comments:

THE FOLLOWING STATEMENT IS ISSUED BY THE PRESS SECRETARY TO THE QUEEN
Her Majesty The Queen of the United Kingdom of Great-Brittain and Northern-Ireland, accompanied by His Royal Highness The Duke of Edinburgh, will mark The Queen’s Diamond Jubilee with a series of regional visits and engagements throughout the United Kingdom during 2012.


The Queen and The Duke of Edinburgh, supported by other members of the Royal Family, will be travelling as widely as possible across England, Scotland, Wales and Northern Ireland.

In addition, members of the Royal Family will travel overseas representing The Queen throughout the Diamond Jubilee year, visiting every Realm as well as undertaking visits to Commonwealth countries, Crown Dependencies and British Overseas Territories.

The Diamond Jubilee central weekend is 2nd-5th June 2012 and will consist of the following:

Saturday 2nd June, 2012
The Queen will attend the Epsom Derby.

Sunday 3rd June, 2012
The Big Jubilee Lunch:
Building on the already popular Big Lunch initiative, people will be encouraged to share lunch with neighbours and friends as part of the Diamond Jubilee celebrations. This may take the form of a traditional street party or a picnic lunch in small or larger groups. This event is being organised by the Big Lunch.

Monday 4th June, 2012BBC Concert at Buckingham Palace:
There will be a televised Diamond Jubilee Concert at Buckingham Palace with tickets being available to UK residents by public ballot. The musical programme for the concert is still being planned and is expected to feature British and Commonwealth musicians. Details on how to apply for the concert will be available in due course. This event is being organised by the BBC.

The Queen's Diamond Jubilee Beacons:
A network of 2,012 Beacons will be lit by communities and individuals throughout the United Kingdom, as well as the Channel Islands, the Isle of Man, British Overseas Territories and the Commonwealth. As in 2002, The Queen will light the National Beacon. The beacons project is being organised by Diamond Jubilee Beacons Ltd.

In addition, the Diamond Jubilee Pageant will take place on 10th, 11th and 13th May 2012 in Windsor. Horses and other acts will travel from all around the world to perform in celebration of Her Majesty’s Diamond Jubilee.

Royal.gov.uk
Posted by Josette at 12:53 PM No comments: